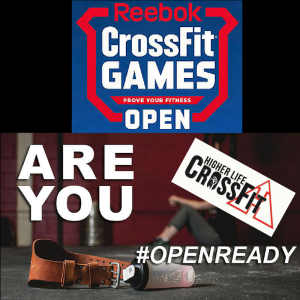 Challenge yourself and test your fitness in the 2016 CrossFit Open. Give yourself a goal to train towards and enter the Open. Registration is online at: www.crossfit.com

You will need to register on CrossFit.com site and then you enter the Open on the site.

Registration is on the 14 January!

The CrossFit Games stand alone as the ultimate test of fitness. No test, regardless of its lofty claims, can grant legitimate title to the best without first providing access to all.

The Games season begins with the online Open. Registration is open to all comers. All you need is $20, access to basic equipment commonly found in CrossFit affiliates, and the will to compete in the five-week, five-workout competition.

More than 272,000 people from around the globe competed in 2015. As the largest CrossFit community event of the season, the Open ties together athletes from within the same gym to those in their broader city, country and world.

For five weeks, you—and the hundreds of thousands of other people who signed up—are at the whim of the Director of the Games Dave Castro, taking on workouts that may push you to learn a new skill, improve the skills you already have, or go into a darker place than you’ve ever been before.

The week’s workout is released each Thursday at 5 p.m. PT, and scores are due four days later (before 5 p.m. PT Monday). You are free to make as many attempts at the Open workout as you please; your only limit is time.

The best of the best will use the Open to launch themselves into the next stages of the Games season. Though for most, the Open is an end in itself. Completing the same workout as the world’s fittest athletes is an accomplishment, as is logging a score for all five weeks.

Each time a workout is released, athletes will be given two versions: Rx’d and Scaled. With reduced loading or less challenging movements, the scaled option will be designed to make the Open even more accessible.

The best of the best from each region in the Open will be invited to compete in the regional competitions in May. The top five men, five women and five teams from each regional will advance to the third and final stage, the CrossFit Games.

Athletes 40-years-old and older may receive an invite to the Masters Qualifier in April. The top 200 masters in each age division worldwide are invited to compete in the weekend-long online competition. Only the top 20 will advance to the Games.

The fittest 40 men, 40 women, 40 teams, 200 masters, and 40 teenagers will compete at the 2016 Reebok CrossFit Games at the StubHub Center in Carson, California.

COME ON…..WHAT YOU WAITING FOR!

REGISTER AND TEST YOUR FITNESS!